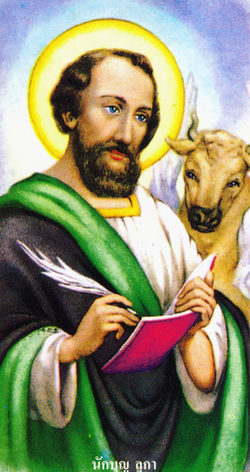 Almost all that we know about Luke comes from the New Testament. He was a physician (Col 4:14), a companion of Paul on some of his missionary journeys (Acts 16:10ff; 20:5ff; 27-28). Material found in his Gospel and not elsewhere includes much of the account of Our Lord's birth and infancy and boyhood, some of the most moving parables, such as that of the Good Samaritan and that of the Prodigal Son, and three of the sayings of Christ on the Cross: "Father, forgive them," "Thou shalt be with me in Paradise," and "Father, into thy hands I commend my spirit."

In Luke's account of the Gospel, we find an emphasis on the human love of Christ, on His compassion for sinners and for suffering and unhappy persons, for outcasts such as the Samaritans, tax collectors, lepers, shepherds (not a respected profession), and for the poor. The role of women in Christ's ministry is more emphasized in Luke than in the other Gospel writings.

In the book of Acts, we find the early Christian community poised from the start to carry out its commission, confident and aware of Divine guidance. We see how the early Christians at first preached only to Jews, then to Samaritans (a borderline case), then to outright Gentiles like Cornelius, and finally explicitly recognized that Gentiles and Jews are called on equal terms to the service and fellowship of Christ.

Luke makes many casual references throughout his writings (especially in Acts) to local customs and practices, often with demonstrable and noteworthy precision. To mention just one example, he refers to two centurions by name, Cornelius in Acts 10 and Julius in Acts 27, and he calls them both by nomen only, rather than by nomen and cognomen (Sergius Paulus in Acts 13;7) or cognomen only (Gallio in Acts 18:12), as he does when speaking of civilian officials. It is a distinction that would have been routine at the time that Luke is writing about, but one that had largely died out by, say, 70 AD. His preserving it shows either that (1) he wrote fairly close to the events he described, or (2) he was describing persons and events on which he had good information, or (3) he was an expert historical novelist, with an ear for the authentic-sounding detail.

Luke is commonly thought to be the only non-Jewish New Testament writer. His writings place the life of Christ and the development of the early Church in the larger context of the Roman Empire and society. On the other hand, his writings are focused on Jerusalem and on the Temple. His Gospel begins and ends in the Temple, and chapters nine through nineteen portray Jesus as journeying from Galilee to Jerusalem. Similarly, the Book of Acts describes the Church in Jerusalem (and worshipping in the Temple) and then describes the missionary journeys of Paul as excursions from and returns to Jerusalem.