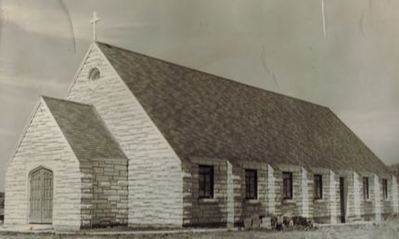 The original church building
St Luke’s Mission was organized in the summer of 1946.  Clarence Van Westapher, a candidate for Holy Orders and a communicant of St. John’s in south Fort Worth, organized a group of faithful in East Fort Worth who began meeting in the Boy Scout building of the Meadowbrook United Methodist Church and in the home of Dr. Frank McKee, Sr.  Mr Westapher continued to lead this new mission until his return to seminary in the fall of 1946.  St Luke’s continued under lay leadership and visiting priests until October 1946 when Fr. David K. Montgomery was called as the first vicar of the mission, who left St. Luke’s the following year to organize All Saints parish in west Fort Worth.

In January of 1948, St Luke’s in the Meadow petitioned the Episcopal Diocese of Dallas for a change from mission status to parish status.  The summer following, the first Church building was completed, still in use today as Abbitt Hall (the parish hall).  The current church was built in 1976 and designed to seat 400.

With the ordination of Rev. Susan Slaughter in November of 2009, St Luke’s has the honor of ushering in the first female ordained as a priest in the Episcopal Diocese of Fort Worth as well as the first female rector in the diocese.